Scott
Scott is a retired Army Special Forces veteran of 22-years, with a Counter-terrorism, Sniper, Intelligence and Diplomatic Security background. He is an internationally recognized instructor in Firearms, Explosive Breaching, Sniper Employment/Operations, SWAT Operations, Surveillance/Counter-surveillance, Covert Entry, Close Quarters Tactics, and is a Federally Certified Active Shooter and Domestic Terrorism Instructor, with over 36-years’ experience teaching a diverse group of international and national law enforcement and military students. Scott is a combat veteran, and currently serves as a Federal Investigator for the Department of Defense where he continues perfecting his entry and investigation skills. Scott is also a volunteer Deputy Sheriff with several local Sheriff's Offices and is a POST Certified Fire Arms and Driving Instructor, teaching pistol, shotgun, patrol rifle, and EVOC courses to over 600 officers per year. On the national level, he has been directly involved in the security and intelligence aspects of many National Special Security Events, to include several Democratic and Republican Conventions, Presidential Inaugurations, State of the Union Speeches, and the Olympics. He has also worked as an independent contractor overseas in support of various operations in Africa, Latin America, the Caribbean, Afghanistan, and other locations throughout the world. He is a certified Locksmith, and is certified to instruct Active Shooter Instructor and Operator Courses, Explosive Breaching, Defensive Driving, Sniper Operations and several other areas. Drawing on his Special Operations tactical experience, Scott has been involved in the planning and execution of Protective Operations for many US and foreign VIPs in hostile and austere environments. Scott has a Master’s Degree in Security Management, a second Master's Degree in Emergency Management, and is fluent in Spanish.

Isaac
Isaac (Ike the Ninja) is a current Sergeant in a large county Sheriff’s Office (750+ officers). He has over 18-years as a sworn officer, with 6-years as a full-time Academy Instructor. He was also a lead member of his agencies SRT for over 10 years. Ike holds certifications in the following disciplines: Firearms Instructor, Less Lethal Instructor; Taser Instructor, Arrest Control Instructor and Defensive Tactics Instructor. As a Lead Instructor at PPC he has excelled in teaching countless officers the tools needed to survive on the streets. Holding high-ranking Black Belts in several disciplines, he has been involved in combatives training for over 28 years. Ike is also a certified instructor in Blauer S.P.E.A.R., Keysi Fighting Method, and Krav Maga systems.

David
David is retired from the US Armed Forces where he served in both the Marine Corps and U.S. Army Special Forces. David is the author of Tracking; Signs of Man, Signs of Hope. His second book "Anti/Counter Tracking; An Illusion of Invisibility" was published by Lyons Press in 2013. David first learned tracking from an indigenous Malaysian who hunted insurgents in the jungles of Malaysia. He fine-tuned his craft through years of dedicated study and instruction from the finest trackers throughout the world, including the Dyak/Iban of Brunei, Nigritos from the Philippines, the San Man of Botswana, the Bedouin of Israel, and Vietnam-veterans from the U.S. Marine Trackers who gained their skills from the Montagnards in the highlands of Vietnam, Laos, and Cambodia. He continues to teach this skill to all branches of the military, law enforcement, NATO, and Allied Forces worldwide. David is fluent in Spanish, Chavacano and Tagalog.

Stephen
Stephen (Steve) is a current Captain in a large metropolitan Police Force (1000+ officers). He has over 29-years as a sworn officer, with 22-years as a full-time SWAT member/commander. With over 2,500 SWAT callouts his depth of experience is unequalled, and he is frequently consulted by neighboring agencies during times of crisis. Steve has taught at his agencies academy for over 20-years, and holds certifications in the following disciplines: Master Firearms Instructor, Less Lethal Instructor; Taser Instructor, Sniper, Range and Shoot-house Safety Officer, Police Leadership, and Master Breacher. As a Master Breacher he is an expert in entry techniques, to include both overt and covert (lock bypass). As a Lead Instructor he has excelled in teaching countless officers the tools needed to survive on the streets. Steve has a BS degree in Political Science, and an MA degree in National Policy. Steve also speaks Italian fluently.

Pete
Pete has been in law enforcement for over twenty years, twelve of those as a Lt. He currently is in charge of his departments Training Section. Pete is also assigned as the SWAT Team Leader, having been affiliated with the team both as an operator and leader for over twelve years, with more than 2,700 high-risk entry’s to his credit. He serves as an instructor on the SWAT Team, has trained countless officers in Surveillance/Counter Surveillance training, and is also certified as a Master Instructor in multiple firearms. Pete has extensive experience as a member of his units vice and narcotics unit, and has more than six years experience as a hostage negotiator. He also has vast experience installing and monitoring covert tracking devices, hidden camera/audio installs, conducting undercover and surveillance operations, planning and leading Dignitary Protection Details, and experience as a police academy instructor. Pete also spent eight years in the United States Army where he worked as an agent in the Criminal Investigations Division, operating in the European Theatre as a Counter-intelligence specialist.

Keith
Keith is a current Federal Law Enforcement Officer. In this capacity he has provided security to Heads of State, Government Dignitaries, and other VIPs, and has conducted security/risk assessments of US Government facilities and buildings around the globe. Keith is also an 20-year veteran of Army Special Forces. He has considerable experience in Covert Entry Operations and Executive Protection, and has worked details for a litany of executives and diplomats, often in hostile or semi-permissive environments. Keith is certified to instruct Explosive Breaching, CQB, Sub-machine gun, Pistol, Rifle, Shotgun, Officer Survival, Defensive Tactics (PPCT), Executive Protection/PSD, Evasive Driving, and Explosives Recognition. He also has extensive experience teaching tactical medicine and law enforcement courses, and has specialized in Emergency Medicine with extensive experience in tactical environments. Keith has a BS and MS Degree in Emergency Medicine (PA), and is fluent in Spanish and French.

Andy
Andy is a retired 22-year veteran of the Army Special Forces, with an extensive Counter-terrorism and Diplomatic Security background. He has also worked as an independent contractor overseas in support of various DOD and civilian-sector operations. He is a Combat Diver (SCUBA), and has five combat tours in Afghanistan and Iraq in support of OEF and OIF. Andy is an experienced professional with over 23-years in EMS operations as a paramedic. He has extensive experience teaching medical, tactical, PSD and law enforcement courses for more than 27-years. Additionally, Andy has an extensive background in coordinating and administering EMT Basic and Paramedic courses at the National Registry level, and has performed disaster relief operations and rescue missions in over 15 countries. He also has a BS Degree in Physics and Mathematics, and speaks German.

Dave
Dave is a retired 24-year veteran of the Army, with 17-years in the Army Special Forces. He has an extensive Counter-terrorism, Medical and Intelligence background. He has also worked extensively as an independent contractor overseas in support of various DOD and civilian-sector operations, and has multiple combat tours in Afghanistan and Iraq in support of OEF and OIF. Dave is an experienced professional with over 22-years in Tactical EMS operations as a paramedic. He has extensive experience teaching Small Unit Tactics, Demolitions, Sniper, Land Navigation, Weapons, Medical, Communications, PSD Operations and Survival techniques for more than 31-years. Additionally, Dave has an extensive background in coordinating and administering Counter-terrorism and Casualty Care courses for the US Department of State in various locations around the Globe. Dave also has a BA Degree in Liberal Arts and a BA in History.

Steve
Steve is a 20-year veteran of the Army Special Forces. He has considerable experience in planning and conducting Covert Entry Operations and Technical Surveillance, and is a lead trainer for several US Government Organizations in the fields of Technical Surveillance, Camera/Body-wire Installs, and Counter-surveillance Operations / Techniques. Steve has over 27-years’ experience teaching and performing Covert Entry Operations for the US Government in a variety of locations and situations around the globe. With over 6-years on the ground in Afghanistan and Iraq he is very up to date on current techniques and equipment. Steve is fluent in Spanish and Portuguese and conversational in Pashtu.

Tommy
Tommy is a 21-year veteran of the Army Special Operations in various Psychological Operations units. He has served in all levels of Army and Joint Information Operations and has extensive experience working in the Public Information realm.  Tommy has served in operations in Somalia and Haiti in support of multiple tactical and Special Operations units.  He has also deployed multiple times to Afghanistan and Iraq in support of OEF and OIF, serving as the focal point for radio and television stations and managing local news and other influence programs throughout Brigade-level areas of operation.  His vast experience includes developing and conducting training for indigenous forces in 12-countries across three continents.  Tommy is trained in the Arabic language and culture and has authored plans to conduct influence operations and public information campaigns in countries across Africa, the Middle East, and Asia.  Tommy is also the lead developer for a promotional video production company and is an accomplished tactical photographer/videographer, providing images/videos for military and commercial purposes.

BJ
BJ is a Master Electrician with over two decades of experience installing high-end and innovative security systems. He has designed and installed systems in courthouses, casinos, Fortune 500 companies, houses of worship, schools, and the US Olympic Center. He has also designed and installed Safe Rooms for a multitude of clients desiring added security, and is a recognized expert in CCTV and covert video installation. His expertise and discretion is sought after and respected throughout the community.

Our Instructors Make The Difference! 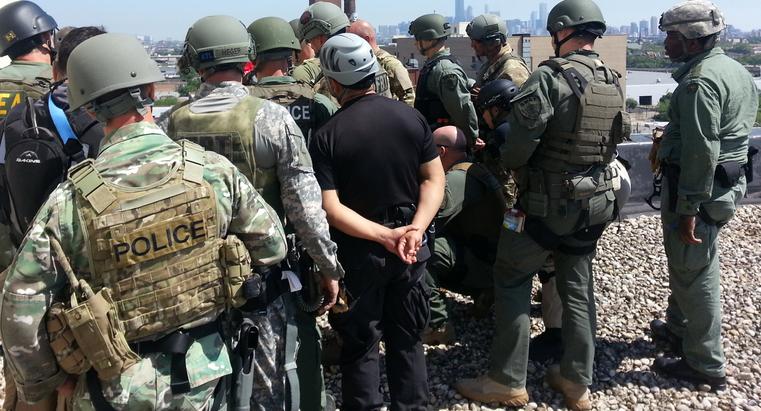 ​Each of our instructors is a recognized expert in the programs they teach, bringing relevant, up to date, and real-world experience to each and every class. Our instructors hold federal, military, law enforcement, or other nationally recognized certifications in all areas they instruct. Participating students will not only learn life-saving tactical concepts, but also their direct and immediate application in the field. We encourage and demand that all instructors continue to improve their instruction capability and relevance through continued education, training, and real-world deployments. All of our instructors are currently employed full-time in their respective fields and bring this expertise to their classes. None of our personnel will ever teach outdated techniques or rest on their laurels and talk about “back in the day”…